Renovating a 133-year-old falling down farmhouse has certainly had its trials and tribulations…but also its treasures.

One of those treasures is this grocery receipt from April 21, 1929. I think it says Bennetts as the “sold to” name, and we have a very big, very old school in our town named R.E. Bennett. Wouldn’t that be cool if our farm-that-was had some impressive connections? Things on the list that we can make out include coffee, nutmeg, allspice, tomatoes, bread, butter, bacon…and several other things we can’t make out. Prices are all in the cents, like 10, 12, and 60 cents. 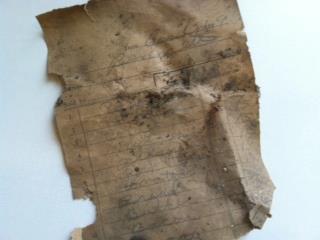 I think this receipt is such a big deal because I feel so much affinity for the moms and wives who have lived here before me, cooking and washing dishes and raising children and tending chickens. They all shopped too! They made grocery lists and paid over hard earned money and budgeted and planned meals. They did what I do. But for me, it’s powered by electricity and modern conveniences like an electric range (although our range is from the 1940s!). For many of the women before me, it was kerosene lamps and a woodstove and water pumped from a well. When I feel like this whole farmhouse renovation is maybe more than I can do, I remind myself of what those women did…and under what conditions. Heck even just getting to town to buy groceries would have been an adventure, since downtown is 15 miles away and this road of ours would have been a dirt one!

Here’s another stash of treasures found last week by a contractor reaching behind a tongue-and-groove wall:

It’s a collection of bottles, one of which still has rose petals in it! Plus a math book from 1920, and possibly a berry box. And some trash. Why this stuff was in the walls is beyond me, but we’ll get those bottles scrubbed up and make some kind of neat display with them…when the farmhouse is done of course.

We have found other treasures too, out in the barn. We have a literal treasure trove of antique tools that we’ll get around to someday.

I like the treasures. I like the real, tangible connection to the past that they offer. Other hands held those bottles and studied from that book. These artifacts, they are reminders that babies were born here, children were raised, couples loved, parents aged…our house has 133 years of life and history; it’s older any of its inhabitants could ever be. And we’re determined to rebuild it and make it sound for another century of living and loving, cooking and caring…and maybe we’ll manage to leave behind some treasures too.

This site uses Akismet to reduce spam. Learn how your comment data is processed.