In order to buy the farmhouse that will become the farm, I* had to get a construction loan to pay for the biggies of foundation, electrical and plumbing. In that big chunk of change, we included some money for chimney repair too, although really I wanted to yank the propane stove and put in a wood-burning one. The bank considered that an unnecessary expense, so we were sticking with propane for the time being, anyway, and getting the chimney fixed.

Until the chimney had to come down, that is. Tearing off sheetrock in the kitchen revealed some chimney surprises, and it made more sense to just yank the thing and put in metal stove pipe instead…which means we can switch to the wood heat we wanted all along.

My poor fiance worked on taking the chimney down the past due days. The first he was on the roof in the dark knocking off bricks. Then yesterday morning taking out cinder block.

Last night he and I and my daughter headed out to take out what was in the kitchen: about 8 feet more of cinder block and mortar to come down. (The video is of my daughter nervously hammering away. She didn’t like being on the ladder! But you can see how much we had to take out when we started last night.) 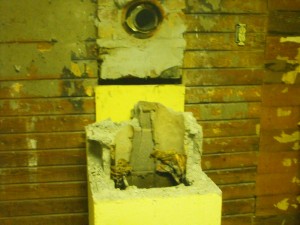 Those two worked on that while I pulled out old rotting fence covered in ivy, but then they were wore out and sore and too tired to beat on the mortar any longer.

They called me into the house and I got to be the “closer,” taking out the last couple of feet until we were down to the hole and the pieces crumbled into the crawl space. Oh, man, was that a satisfying feeling, when that first chunk fell through to the ground and I could see the darkness of the crawl space at last!

The photos show the progress, getting the chimney removed little by little. The rubble pile is what was left on the kitchen floor, but there was plenty more. This pile does not show the rubble pile in the yard (from the roof), in the driveway (from pitching pieces out the kitchen window), or upstairs (from the attic).

Nor do the photos show the clouds of dust! While they were inside working on the chimney and I was outside tackling the fence, the dust drifting out of the kitchen window was so thick it looked like smoke!

Some of the small pieces Bob swept up into feed bags (which we’ve decided work far better than garbage bags that rip so easily!) and dumped in muddy spots for more traction for the truck. We’ll try and break up as much of the stuff as we can to use this way, since the dumpster has been filled up and hauled away (another step forward!).

Finally, we have an empty wall, the only one in the kitchen and a place for a table and chairs, very important to me as the intended radical homemaker (more on that in later posts).

I keep joking that every time Bob works on the house, we have less house, but it’s all good. All the crap and rot and bad repairs and poor decisions of the past are getting cleared away to make room for a well put together house that will last another 100 years, as one of my friends sweetly said on Facebook.

And then? Then we farm! Someday. I hope. This year. First I need more ibuprofen…

*Note: People get on me about saying “I” and not “we” but the truth of the matter is, my poor fiance had no say in this purchase. I was already buying this beat up old neglected small farm when we met. Just lucky for me he was willing and even glad to become a part of this whole endeavor!! Although admittedly neither of us had any idea just how much work would be involved. He’s a hardworking saint, that’s for darn sure!

This site uses Akismet to reduce spam. Learn how your comment data is processed.